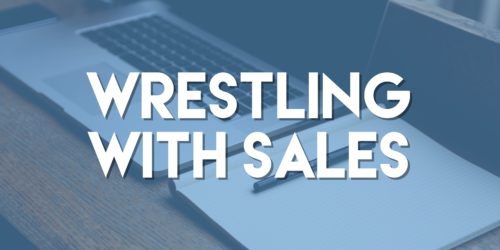 Wrestling brought me halfway across the country and away from home to Fargo North Dakota several years in a row.

One of those years, I remember distinctly wearing the red and gold Team NJ singlet. I was wrestling in one of the opening rounds. The score was tied 2-2, and I was wrestling an opponent clearly wearing a blue singlet. I executed a throw and took my opponent from his feet to his back, and we went out of bounds. At that time, this would have been a 3 point move for me. (Freestyle wrestling rules change so much that as of writing this it is a 4 point move)

I looked over at the scoreboard fully expecting the score to be 5 (red) – 2 (blue), but it was the opposite. I looked at the scoreboard again, double checked my singlet color, and perplexed made my way back to the center of the mat.

Coach Vern Zellner and Coach William Terrell looked over at the score confused as well. As we came back to the center of the mat, I thought someone would fix the score; but the whistle blew again, and I had to keep wrestling. So now, in essence, I was dealing with a 6 point swing against me. Then I remembered the wisdom of the great Donn Ernst.

“Take the ref out of the match!”

“It shouldn’t be that close!”

“Be ready to win the match again!”

A few takedowns and turns later my hand was raised I won that bout 9-6 and didn’t give much more thought to that match. If I would have lost that match, I wouldn’t have blamed the ref but would have placed the blame directly on myself. There is something about the sport of wrestling that teaches personal responsibility like nothing else. 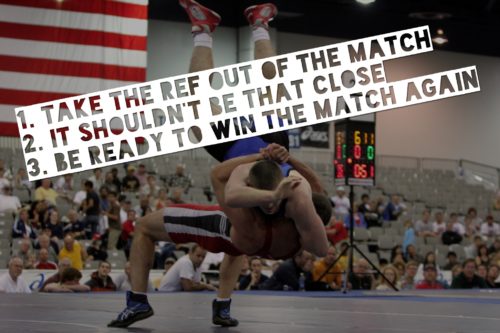 In wrestling, life, and in sales there will be calls that will not go your way, and here are a few takeaways:

While I am more than twice as old as when I first heard Donn Ernst shout those words to me in a sweaty garage across from the East Brunswick Mall, they still resonate with me today.